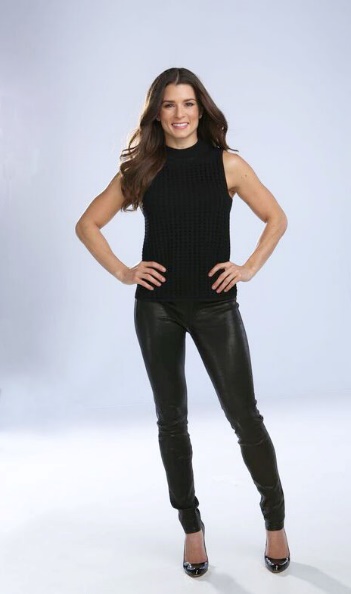 BURBANK, Calif.– June 12, 2018–Professional racecar driver Danica Patrick has been chosen by Nickelodeon to receive the Legend Award at this year’s Kids’ Choice Sports 2018, the summer’s slimiest, surprise-filled sports showdown for kids. Patrick, who became the first female winner in IndyCar Series history, will receive the award in recognition of her trailblazer achievements and outstanding sportsmanship on and off the racetrack.  Kids’ Choice Sports 2018 is hosted by Chris Paul and airs Friday, July 20, at 8:00 p.m. (ET/PT) on Nickelodeon.

Said Patrick, “It’s such an honor to receive the Kids’ Choice Sports Legend Award from Nickelodeon. I decided when I was 10 years old I wanted to be a racecar driver. I dreamed big, believed in myself, worked hard, took chances and made the most of every opportunity. Today, I’m honored to be a positive influence on kids and encourage them to stay true to themselves and what they believe in; keep dreaming big and working hard. Bring on the gold slime!”

Kids can vote on three new categories this year including: “Nothing But Net,” highlighting athletes who score the shots; “Heavy Hitters,” celebrating the power-hitters; and “Winter Wonders,” featuring those who dominate the cold weather. Additional categories will be announced closer to the show.

The Legend Award honors athletes who are the ultimate role models to kids across the globe, inspiring generations year after year. Patrick, who is the fifth athlete to receive this honor, joins a prestigious list of past recipients including most decorated Olympian of all time Michael Phelps, five-time NBA Champion Kobe Bryant, soccer legend David Beckham and five-time World Series champion Derek Jeter.

The categories and nominees for Kids’ Choice Sports 2018 are:

FAVORITE MALE AND FEMALE ATHLETE
They are, simply put, the best athletes of the year. Driving the offense or barreling through the toughest defense, they never cease to amaze fans with their athleticism, moves and mastery of the game.  In short, the nominees for these two categories represent the best male and female athletes currently competing in traditional sports.

KING OF SWAG AND QUEEN OF SWAG

All professional athletes do incredible things, but there are a select few who also look incredible while they’re doing it. The male and female nominees in these two categories are the best dressed and most stylin’ athletes off the court.

Some of the most incredible arms in sports belong to athletes from the worlds of baseball and football. This category honors pitchers and quarterbacks with the strongest arms in the game.

This award honors those players that are an undeniable force on the field, court and in the ring. Like a freight train or a Mack Truck, these athletes have so much power in their play that they cannot be stopped. They are the power forwards that slam dunk with such force they can shatter a backboard, the football players that move with such power that it takes an entire team to stop them and the MMA fighter that is unstoppable in the ring.

This award celebrates the power hitter athletes with the biggest swings and strongest shots on the baseball field, tennis court, ice rink and golf course. These athletes have unbeatable strength and it shows with their impressive, game-winning hits.

CLUTCH PLAYER OF THE YEAR

Teammates rely on these athletes to make the plays when it counts the most. Their participation is clutch to the success of their teams, and the fans know it.  The nominees in this category come from a variety of sports and alter the game just by being on the field.

DON’T TRY THIS AT HOME

They flip, fly and soar their way into the highlight reels of the X Games and other action sports competitions on the regular, and kids can’t get enough. They’re the death-defying athletes who risk their lives and limbs every day to accomplish the impossible.

The excitement surrounding a new sports prospect can be incredible, especially when that prospect starts to deliver on the anticipation of greatness. The nominees in this category represent the first or second year pros who have lived up to the hype--in other words, the newbie that is most likely to succeed.

Every season has its most-talked-about, spectacular or awe-inspiring catches and saves. The nominees in this category represent athletes from the MLB, NFL, NHL and U.S. Women’s Ice Hockey team. These athletes have made the most unbelievable, highlight reel-worthy catches and incredible saves of the year.

This award honors those players that live life in the fast lane. Whether it’s skiing, skating, driving or sledding, these athletes bring the fast and furious to the race. They are the lightning quick speed demons that won’t stop until they’re in first, and the rest of the competition eats their dust.

Professional athletes make it look so easy that sometimes fans forget the sheer agility required to play with the best of the best--until they see the nominees of this category do their thing. They’re the soccer players with the mind-blowing dribble, the hockey players who can do amazing things on skates, the football players who dazzle us with their fancy footwork, or the basketball players with the best ball handling skills.

You need to score to win, and these nominees are the ones scoring the shots! This category honors the most accurate scorers in the game. These are the players who maneuver through the most striking defensive plays and still make the shot, who can come out of a foul and still make the goal, and who work hard at every practice to play an amazingly accurate game.

These athletes dominate the cold. Their unparalleled strength, grace and agility turn into wins on the slopes and on the ice, proving that these elite winter athletes are the best in the world.

KCS2018.com will serve as the official destination for Kids’ Choice Sports 2018. Starting today, kids will be able to cast their votes for their favorite athletes and all-star moments from the past year. After voting, it’s game on with all-star polls, sports-themed short-form videos, trivia, photos and more for kids to check out online.  Additionally, on July 21, kids will have the chance to play along and root for their favorite athletes during the show on KCS2018.com.

Nickelodeon’s Kids’ Choice Sports 2018 is produced by Done and Dusted in association with Nickelodeon Productions. Jay Schmalholz and Shelly Sumpter Gillyard are executive producers. Constance Schwartz and Michael Strahan of SMAC Entertainment will serve as executive producers, alongside Ian Stewart and Hamish Hamilton of Done and Dusted, with Hamilton also serving as director of the show.

Nickelodeon, now in its 39th year, is the number-one entertainment brand for kids. It has built a diverse, global business by putting kids first in everything it does. The company includes television programming and production in the United States and around the world, plus consumer products, digital, recreation, books and feature films. Nickelodeon’s U.S. television network is seen in more than 90 million households and has been the number-one-rated kids’ basic cable network for 22 consecutive years. For more information or artwork, visit http://www.nickpress.com. Nickelodeon and all related titles, characters and logos are trademarks of Viacom Inc. (NASDAQ: VIA, VIAB).